The Southworth Library at 24 West Main Street was designed by Ithaca architect William Henry Miller in Romanesque Revival style and completed in 1894. Jennie McGraw Fiske, who gave Cornell University its chimes, bequeathed the idea and the funds for this library. The building is on the National Register of Historic Places. For a visual history of the library, check out this link.

Our benefactor, Jennie McGraw was born in Dryden in 1840. Because of her love for Dryden, Jennie wanted the community to share the wealth inherited from her grandfather. Her lifelong involvement with education, travel, and all things cultural was evident in her will.  A $30,000 trust fund was set up for the establishment of the Southworth Library Association, whose purpose was to build and maintain a library in Dryden as a lasting memorial to her mother and her grandfather. The Southworth Library Association was incorporated on April 22, 1883.

The library opened on September 25, 1884 in a temporary location on the southeast corner of Union and South Streets. William Henry Miller, architect of Cornell University’s Uris Library and many other buildings in and around Ithaca, was engaged to design a permanent building.

On October 10, 1893, the cornerstone was laid at the present site on the corner of Main Street & Library Street. Built of Ohio sandstone at a cost of $15,000, the Southworth Library was completed in 1894. It contained two reading rooms and stack rooms with unique open grid flooring for maximum circulation of air. Space was allowed above the stacks for the future addition of another floor if and when that became desirable.

About 2,000 books costing $2,500 were purchased to start the collection. The remainder of the fund was invested for the maintenance of the building and addition of books. Today, income from the endowment provides approximately 35% of the Library’s annual operating expenses.

In 2010, the library opened the Lincoln Center Addition, made possible by the sale of a handwritten copy of Abraham Lincoln’s 1864 re-election acceptance speech. Called  the “Victory” speech, it was sold at auction at Christie’s in New York City on the 200th anniversary of Abraham Lincoln’s birth, February 12, 2009.

The Southworth Library has the following historical items in its inventory for the general public to view:

Three primitive oil paintings of Jennie McGraw’s parents, John and Rhoda, and John Ellis, her great-great-grandfather, were presented to the library in 1886.

In 1986, the portraits of John and Rhoda McGraw were restored to bring back the original detail and to preserve them for the future.

A beautifully bound volume of poems written for Jennie by Willard Fiske. The volume was given to the library by Mr. Fiske in 1887 after Jennie’s death.

Mr. Fiske also donated a unique set of the works of John Dryden, the English poet for whom our town was named.

Dryden’s first newspaper, Rumsey’s Companion, began publication in 1856. Copies of all issues are available digitally in our archives.

Original copies of the Centennial History of Dryden, 1797-1897, can also be found at the Library. Reprints of this valuable historical account were first offered for sale in 1976, a project of the Bicentennial Committee. 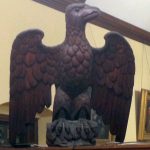 The eagle displayed in the reading room was hand-carved from two pieces of applewood. It was a gift from S. Jansen Miller, a Dryden native and world-famous violin maker. 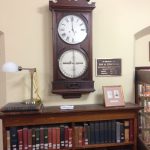 This Ithaca Calendar Clock was purchased in memory of Fay Stafford, Member of the Southworth Library Board of Trustees from 1939 to 1987 and President of the Board from 1948 to 1987.

Explore the news of Dryden’s past on the Southworth Library’s digital archives of historic newspapers from 1856 to 1983.